No Result
View All Result

by Chelsea Barone
in Customer Experience
Reading Time: 5 mins read
A A

The 2018 Winter Olympics are underway and we couldn’t be more excited! About the super-cool resulting retail technology that is. The Olympics often mark opportunities for industry leaders to showcase their latest and greatest technologies, and they get to do it on a global scale. This week’s retail tech roundup looks at the cutting edge retail technology that’s made its grand debut at this year’s winter games.

Here are some of the leading headlines that show the retail industry at the top of the game, ready to compete:

Under Armour Bets Big on the 2018 Winter Olympics
After a debacle citing Under Armour as the culprit for the U.S. speed skating team’s lack of medals in the Sochi Olympics in 2014, Under Armour is back with a vengeance in PyeongChang this year, with their logo on 375 athletes’ uniforms from 16 different countries. A recent article from Rich Duprey at Motley Fool elaborated on Under Armour’s strategy at this year’s Olympics and what events in the retail industry led to their approach.

“As Under Armour founder and CEO Kevin Plank admits, the company is at the “intersection” of a confluence of events: the decline of its domestic markets even as international markets expand, Amazon.com’s upending of the retail space, an increasingly competitive marketplace, and the fickle consumer who can no longer differentiate between commoditized products,” explained Duprey. “That means Under Armour is forced to swing for the fences with events like the 2018 Winter Olympics.”

A lot rides on the 2018 Winter Olympics for Under Armour – can their cutting edge uniforms repair the damage done to the brand four years ago? Will their massive presence at the games spark new, international business in an increasingly commoditized industry? Only time will tell.

One of our favorite parts of the Olympics is getting decked out in official team USA gear. Fanatics, a company that sells Team USA Merchandise, has taken a new, omnichannel approach to sales this year by employing a pop-up store strategy, as opposed to their traditional practice of selling only at the Olympic Training Center in Colorado and online.

The company has opened their first physical store outside the training facility in Rockefeller Center in New York City – an excellent testing location to see how it affects their revenues. It’s hard to beat a location with an iconic reminder of the ongoing Olympic games – the Rockefeller Skating Rink!

According to a recent article from PYMNTS, this tactic is meant to sidestep the normal red tape that comes with maintaining a traditional chain of brick-and-mortar stores. With more innovative landlords that are open to untraditional (but profitable) retailing models, this could signify the mainstreaming of more flexible brick-and-mortar retailing.

“This new model of retail seeks to solve two problems that traditional brick-and-mortar retailers face — inflexibility and expense — as retailers like Fanatics undertake retail experiments like a brick-and-mortar Olympic gear store,” reported PYMNTS. “With a standard lease in a mall, for example, retailers can face a 10-year commitment to stay in the same space. But landlords like Rockefeller Center are taking retail spaces that might otherwise be vacant and turning them into pop-up stores.”

Attendees at the 2018 Winter Olympics have the option to use Near Field Communication (NFC)-enabled wearables from Visa to pay for products at the games. According to an article by Teena Maddox at Tech Republic, the wearables include a commemorative sticker, a pair of gloves, or an Olympic pin

Here’s a look at the gloves, courtesy of Visa: 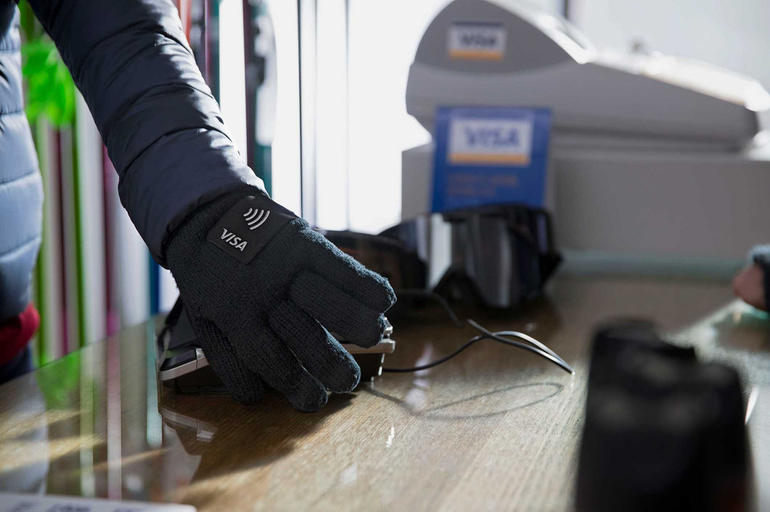 Maddox reported, “Greg Kahn, CEO of the IoT Consortium, said the Olympics is a showcase for new technology and what can be done in terms of high-speed internet in smart cities and what we can look for in wearables.”

It’s no surprise that the Olympics inspire innovation on a global stage, especially in such a tech-forward market like South Korea. We are excited to see the continued adoption of NFC technology and how this application could spark growth in the way of wearable payments. We’ve said it before and we’ll say it again, the future of retail is here, folks!

How NFC is changing the Way We Interact with ATMs

No Result
View All Result